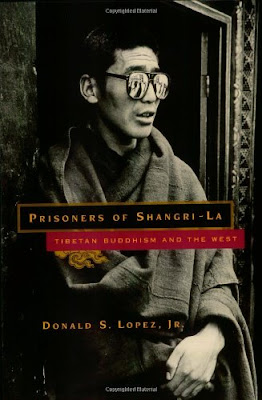 I haven’t written for quite a while. It’s been a busy few months and I’m spending most of my enthusiasm for writing on a book that is in the works and an extended piece on re-configuring enlightenment. It is proving an enormous endeavour, so for now I thought I might write a review or two of books I’ve been reading lately, and perhaps a few classics that have inspired me over the years. These posts won’t be so profound I’m afraid, but perhaps they will point out some worthwhile books for those who would like to delve into some of the more articulate voices reporting on the world of Buddhism and Shamanism, as either insider, outsider, or both. Onto the first review.

If you have read any of my blog posts, you will know that I have a particular fascination for examining elements of both Buddhism and Shamanism, especially the false assumptions I myself absorbed growing up in the 90s with the New Age boom in the UK, which I participated in fully. Applying a pinch of objectivity became the norm for me in my early twenties when dealing with the latest self-claimed enlightened weirdo in Glastonbury, or when reading a copy of Kindred Spirit or Sacred Hoop (the number one New Age publication and Shamanism magazine in the UK), but looking carefully and objectively at Buddhism and Shamanism as activities that I was engaging in wholeheartedly was less possible back then. It took me many years to get to a point where criticism did not simply equal reaction and unnecessary destruction. The desire to lift up the comfortable rug of assumptions I still hold regarding both Buddhism and Shamanism and examine the dust and dirt lying underneath, sometimes very well hidden between floorboards, has mainly become important to me because I have in truth spent such significant periods of my own life being absorbed by them. Bringing our beliefs and ideas out into the open is not as hard as it may seem, but when it comes to assumptions, the task is more difficult. Assumptions are that which we naturally and unquestioningly hold to be true, to be the way of things. We wear our assumptions so close to the skin that we are almost always unable to perceive their role in our perceptions and interpretation of experience and the world, unless someone else points them out to us.
This week, I finally finished a book for the first time in 18 months and boy was it satisfying to do so. The book in question is by David Lopez, a university professor of Buddhist and Tibetan studies at the University of Michigan. It’s title is Prisoners of Shangri-La, but be aware, the prison is not that of the Chinese, but of the western imagination. Lopez reveals through each of the chapters in his book the story of the construction of a piece of the collective western imagining of Tibet which makes his book likely to appeal to those who have explored Tibetan Buddhism to any meaningful degree. Although the book is about Tibet, it really covers the idea of Tibet and its creation in the western imagination through the narratives and adventures of the usual gang of Euro-American misfits; Christian missionaries, intrepid explorers, army officers, academics, oddballs and romantics. I say usual, because Western engagement with Buddhism, Shamanism, Hinduism and other spiritual forms outside of the Biblical trio all seem to be subject to the same misinterpretations, initiated by the similar figures with similar agendas, all shaped by western empire building and ethnocentric blindness.
The book is divided into seven chapters, each exploring the creation of a western idea, term, concept, and relationship with different aspects of Tibet. It begins with Buddhism as religion and paints a portrait of revulsion, dismissal and finally a label of purity as Lamaism shifts and warps through various incarnations before being allowed to stand alongside the others Buddhisms found worldwide as Tibetan Buddhism. The second chapter explores the various translations of the Tibetan Book of the Dead, from LSD trip manual to blueprint of psychological states to its original and intended purpose as a map of the six realms of rebirth and the means for helping the dying.
The most surprising chapter (it was certainly so for me) explores an almost forgotten character from the last century: an eccentric from England who called himself Lobsang Rampa and pretended to be a Tibetan Lama and possessor of supernatural powers. He’s actually the best selling author to have ever laid pencil to pen in describing Tibet and Lopez illustrates nicely how he is in many ways a metaphor for the preference of the imagined in the West when it comes to Tibet and how westerners'  distorted visions have even been absorbed by Tibetans themselves, including the Dalai Lama. Further chapters cover the omnipresent mantra Om mani padme hum, Tibetan art, Shangri-la and the geographical landscape of Tibet.
Lopez’s style is readable, fluid and informative and like most successful academics to produce popular works for a non-academic audience, he weaves in conclusions informed by other fields of thought, whilst avoiding overly-technical language and excessive call to prior, or expert knowledge. Although it contains a wealth of material for popping bubbles filled with fantasies about Tibet and its people, it is not aggressive, pushy or arrogant. It simply undoes a series of knotty riddles woven about Tibet by idealistic westerners searching for a drop of purity, of perfection, in a muddled and confusing world.

Links:
Amazon book page
Interview on Belief.net with Lopez in which he mentions the book
Lobsang Rampa and his Third Eye best-seller
A far better review than my own if you want to know more