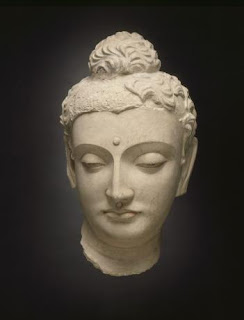 To be awakened is to participate in creative acts of engagement with the world in which we exist, including its historical and symbolic structures. If anything, that is the game we are called to engage with, if we awaken as human-beings and not as transcendent super-humans. These creative acts of engagement are ultimately a form of communication. After freedom is gained from the me-making self obsessions and their rootedness in layers of conditioned illusion, to communicate with other human beings may be understood as a recognition of that same potential in the individual, but it may simply be the earned ability to see the individual simultaneously as a product of their world and as a free individual at once and speak successfully to both. For genuine communication to take place we can either baffle and amaze our interlocutor with our new bangles and jewellery, as some do in a sort of weak narcissistic act of parenting, or we can communicate to the individual as a resident of the world they inhabit and to the roles that they are embedded in. It seems to me that the image of the Buddha that has been passed down to us is of the latter model, even if it is a mock image. It seems to me that many traditional Buddhist teachers, who may be quite awake, believe that the best means for them to continue the latter tradition is to spread and sustain the tradition that has enabled them to reach the point they are at. But, for others, and I think this is where a creative act emerges that is of greater value, a pushing through, or delivery of a blindingly sharp observation of alternatives that speak to the time we are in is the most powerful options available to a person who is actually able to see and who feels that drive to disrupt the norms of the status quo. Those are the voices that echo through history in a sense, that are more likely to produce actual change outside of a small circle of followers, or a shift in consciousness within a collective. This type of act, or dedication to pushing through the status quo is what is needed for any real change to occur and for the awakening of an individual to be of any lasting value.
Within Buddhism there are socially sanctioned means and avenues for expressing the compassionate drive to help others, and alleviate suffering in the world. The establishment of norms regarding the type of behaviour exhibited by a semi-awake, or awakened individual may be laid out for him or her. This gives social recognition and a meaningful role to the individual, as well as a clear direction and avenue for expressing the compassionate act. But what of those who do not exist within such solid social constructs? And what comes next? Two key terms reoccur again and again within Mahayana Buddhism: compassion and wisdom. Compassion seems to provide a usable metaphor for proceeding after the dissolution of the phantom-I. Compassion can be understood as to be with another and able to comprehend their experience and their suffering. Empathy is a natural sign of boundaries weakening between one individual and another and their experience and compassion appear to imply that we are able to connect well enough to another to know their experience. If the false self structure is dissolved, then the natural ability to be with others certainly must increase as a result. We may cease to suffer, but there is no reason to believe that we stop feeling the suffering in others. I would be highly suspicious of anyone who makes such claims.
Wisdom may be in part not the ability to validate Buddhist themes, but an increasing perception of what is unfolding and what is important within a given circumstance through more complete and unhindered participation, and hopefully the ability to communicate to that. Needless to say, these two would really warrant a further essay.

In this essay I have attempted to reconfigure enlightenment taking Buddhism as the essential source and then attempting to shed some of the baggage that accompanies common attitudes towards enlightenment. I have been a faithful Buddhist Modernist in the way David McMahon has defined in his great book, by uniting disparate elements from different Buddhist traditions, whilst utilising modern thought methods for attempting a fresh look at a normally abstract phenomena. I have abandoned reincarnation and mentioned science too. In my case this has all happened consciously however and I have done my best to be true to my remit – to avoid any talk of special, or consigning any particular special category to Buddhism. I have utilised elements of Buddhism consciously and realistically do not see how it is possible to achieve the premise laid out in this essay for awakening without methods and observations that have proven to work and that have survived long enough to be available today and that emerge from Buddhism. Meditative techniques that derive from Buddhism are an effective means for developing clarity in awareness and thought and they provide a basis for exploring the key themes of death, impermanence and the suffering self and the phantom nature of the I. Buddhism is not a single authority on any of these topics however. It also fails in many regards to provide an adequate means for understanding the relationship between the individual and society, which is no surprise considering it emerged as a tradition over two thousand years ago when the world was a very different place.
I have tried to define enlightenment as awakening from and as freedom from specific forms of entangled suffering and illusion regarding the phantom-I. I have taken a model prominent in early Buddhism and utilised by some modern Secular Buddhists and reworked it to extract a view of four stages that may be loosely considered an overlay for a lived, human felt adventure, through which, increasing freedom is obtained as we wake up to the nature of the phantom-I, as it is, embedded in multiple structures of me-making. I have tried to make it clear that I consider it a perfectly human and perfectly possible endeavour and after all perhaps not as complex as it is traditionally made out to be.
This naturalised approach seems highly reasonable and functional, and a further step in removing the mystique that surrounds the romanticised interpretations of the path and lengthening of goals to abstract dream like distances, out of reach of mere mortals, where hence we can only dream of knowing. Such indulgent watching does not serve the purpose of reducing suffering, whether emotional, mental, physical or other. Only sober engagement and avid exploration will lead us into gaining clear insight into how we are in the world and how this world is and how the two interact and depend on each other and how we are both singular and collective beings and the causes of our suffering and the sustainment of that suffering is found in both


If you made it this far, congratulations and I hope it was worth it. Here are a few further links for the curious.